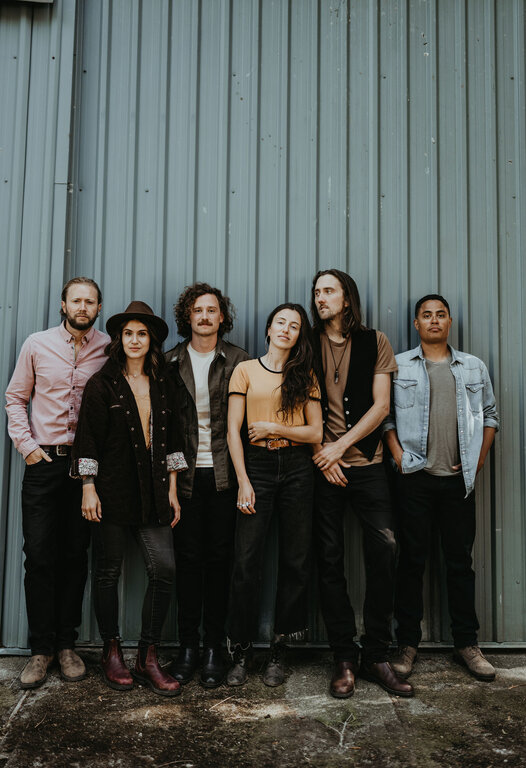 Like the rainforests from which their name derives, the steady beat of the west coast can be found within the sound of Carmanah. From muddy, blues-funk to light, soaring harmonies, Carmanah creates music that curves and tumbles through valleys and over peaks, guiding the listener on a celebratory sonic journey.

With one album behind them and one ahead, Carmanah is crafting a musical niche of their very own, a vintage blend of the intuitive and the technical; a blend that lies somewhere among roots, rock and blues — all seamlessly woven together by Laura Mina Mitic’s soulfully luminous vocals.

Iris, their forthcoming album, is a natural evolution and a moody counterpoint to their debut. Recorded between the wild forests of B.C. and the concrete high rises of Brooklyn, Iris is a heartfelt offering, a tapestry of thoughtful stories for our time. Undulating rhythms and bountiful instrumentation create a rich sonic backdrop for driving melodies and potent lyricism. The first track, ‘Mountain Woman’, shows rousing vocals layered atop of propulsive rhythms, a joyful assertion of feminine energy and natural power. Lead single ‘As I See You’ is one of the gentler songs on the album, a sultry composition that speaks of friendship and holding up the people you love while valuing what they love in you. It’s a track that carries a compassionate message; “By embracing those who love us, within ourselves we can find a sense of home and belonging in our own skin”, says Mitic, “By caring for the environment around us, we also care for ourselves.”

As a collective, Carmanah — whose lineup also includes guitarist and vocalist Pat Ferguson, keyboardist Mike Baker, bassist Jamil Demers, drummer Graham Keehn and backup vocalist Lo Waight — share a reverence and respect for humanity and the earth. This shared ethos guides the decisions they make as a band; from being ambassadors for The Jellyfish Project, an educational and movement-building environmental organization represented by a global coalition of musicians; to touring in a retrofitted vegetable-oil driven tour bus, an ambitious project that Ferguson himself has taken on in his own backyard. Woven into their music is contemporary comment on the current political climate, environmental issues and the human condition; “I get really excited when I think about music as a way to spark action,” Mitic explains.

The passion and authenticity Carmanah brings to all that they do has certainly caught the attention of audiences and media alike. Jon Williams of The Zone @ 91.3 Victoria calls Mitic “the Stevie Nicks of our generation” and Mike Devlin of The Times Colonist states that “"Very few bands in Canada fuse harmony with adventure in the way Carmanah does in concert.” Vancouver’s Daily Hive recently ranked the band among B.C.’s top acts to look out for, and with the band playing to rapidly growing audiences there are plenty who agree. Appearances at notable festivals such as Edmonton Folk Festival, Hillside Festival and Winnipeg Folk Festival, as well as tours throughout Canada and the US supporting Current Swell, Hey Ocean! and others, have allowed the band to hone their craft, while their natural chemistry as musicians electrifies the crowd. "The thrill of making a connection with an audience — any audience — is what keeps me going," says Ferguson.

While Carmanah shines in front of live audiences, their emotive music has also found new audiences after being featured on the soundtrack for the independent film Run With The Ghosts of Giants (2019), as well as on such TV shows as CBC’s Heartland, Showcases’ Lost Girl and CityTV’s Hudson & Rex.

Carmanah shows that commercial success does not mean compromised personal values; that cross continent touring can also be low-impact; that a moral compass serves to make the path more clear, and that the music always sounds better when you play it with friends.